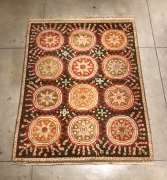 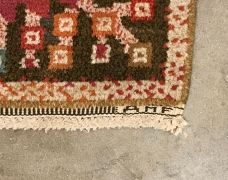 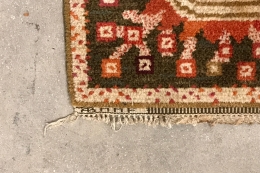 Ann-Mari Forsberg (Swedish, 1916 – 1992) was a textile artist and professor at Konstfack in Stockholm from 1953 - 1981. Forsberg herself attended Konstfack as a student, where she studied under carpet and tapestry designer Barbro Nilsson. Following her graduation, she worked at the textile studio Handarbetsts Vänner, where she also taught. She joined Märta Måås-Fjetterström in 1943, where Nilsson was creative director. During these years, Forsberg’s creations were featured in exhibitions at the Swedish – French Art Gallery in Stockholm, the Malmö Museum, the Royal Academy, and the Röhsska Museum.

While at MMF Forsberg explored monumental tapestry weaving, often using contrasting patterns, colors, and shapes. Her work is marked by rhythmically contrasting shapes, diagonal lines, geometric motifs. She created both abstract and narrative works, which are represented in the public collections of the Swedish National Museum, the Norwegian National Museum of Decorative Arts and Design in Trondheim, Norway, and the National Museum of Art, Architecture, and Design in Oslo, Norway. She also created public works for the National Board of Health in Sweden.