Axel Salto (Danish, 1889 - 1961) is considered to be a master of Danish design, although his ornate, decorative ceramics often went against the simple, functional aesthetics popular in their time. Trained at the Royal Danish Academy of Fine Arts, Salto began his career as a painter, meeting Matisse and Picasso in Paris; he stayed active in the fine arts world, producing a journal that became the forum for the modernist movement in Denmark and cofounding a group in Paris of other Scandinavian artists.

Salto turned to ceramics in the mid-1920s, for which he’s most well-known. He was inspired by the forms of nature, like seeds, flowers, or fruit, and his works show the influence of ancient Asian traditions. Salto began his ceramics career with Bing & Grøndahl, working briefly with Carl Hallier and then at Saxbo Ceramics, before settling at Royal Copenhagen, where he designed from 1933 through the 1950s.

His ceramics are classified into three categories: budding (with rounded protrusions reminiscent of seed pods), sprouting (with projections suggesting plant life), and fluted (with simple ribbed patterns). Often using relief patterns, Salto embraced different glazing techniques to highlight his designs. While working at Royal Copenhagen, Salto developed a series of glazes specifically for his work, experimenting with colors atypical to Danish design, like bright green and turquoise. His favorite glaze, called solfatara after a sulfurous Italian volcano, was banned in 1958 for potentially including a radioactive ingredient; the thick, greenish-yellow glaze pooled in the crevices of Salto’s designs, creating unique variations in color.

Salto won a number of awards, including a silver medal at the 1925 Paris World Exhibition, the 1937 Paris World Exhibition Grand Prix, and the 1951 Milan Triennial Grand Prix. His pieces were bought at the height of his career for the collection at the Copenhagen Industrial Arts Museum and are also found in the collections of the Victoria and Albert and the Metropolitan Museum of Art. 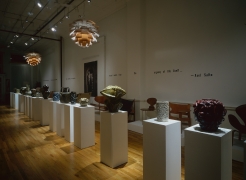