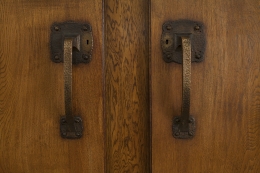 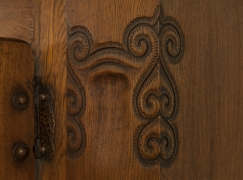 Carl Westman (1866 - 1936) was a Swedish architect and designer. Best known for his romantic style, he also incorporated a neo-classical approach in the 1920s. He is celebrated as the first Swedish architect to introduce a new Nordic National Romantic style - a merging of ideas from the English Arts and Crafts Movement along with prehistoric or medieval architectural styles.

Born in Uppsala, he studied at the Royal Swedish Academy of Arts in Stockholm from 1889-1892. He moved to New York City with his wife to work for the architect, R. L Daus. In 1895, they returned to Stockholm where he practiced under the architect Aron Johansson before opening up his own firm in 1987. He became the chief architectof the Swedish Royal Medical Board in 1916.

His most notable buildings using the Nordic National Romanic style include Swedish General Medical Association building in Stockholm, Röhss Museum in Gothenburg, and the Stockholm Court House, to name a few. He later specialized in designing several hospitals, adopting more of the classical 1920s style, such as Beckomberga Hospital and the Karolinska Hospital, which was completed after his death.