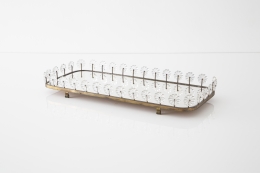 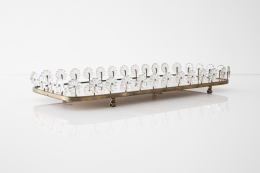 Estrid Ericson (1884-1981) was a Swedish artist, designer and accomplished entrepreneur responsible for both the establishment and longevity of Svenskt Tenn (Swedish Pewter), a Swedish interior design company for which she served as managing director for 56 years. Together with Nils Fougstedt, Ericson developed Svenskt Tenn into a most influential enterprise involved in manufacturing and design, imports, exports, retail sales and consulting services.

Ericson was born in 1894 and raised in Hjo in Vastergotland. In the early 1920s, she trained as a drawing teacher at the Technical School in Stockholm. Thereafter she worked for several years as an art teacher, a pewter artist and interior design consultant at Svensk Hemslöjd and Willman and Wiklund.

In 1924, together with fellow pewter artist Nils Fougstedt, Ericson opened a small pewter workshop, and later in the same year they founded Svenskt Tenn in Stockholm.  Initially, the company produced and sold creative modern designs in pewter, which were recognized for their wonderful quality of craftsmanship. In the 1930s, the focus of Svenskt Tenn shifted away from pewter and onto interior design and architect-designed furniture.

In 1934, Ericson offered the Austrian architect Josef Frank a position within the firm, which proved to be an important driving collaboration for Svenskt Tenn. Ericson and Frank developed an iconic style that, while adopting some of the tenets of functionalism, maintained a warmth, sophistication,

and elegance particular to the Svenskt Tenn brand. Frank contributed simple, modern furniture designs and richly patterned textiles, while Ericson would create decorative objects and stage harmonious arrangements with overlapping traditional and modern styles, featuring equal parts luxury and accessibility, unrestrained by any particular national style. The result was a resonance among many consumers in Sweden and beyond.

Svenskt Tenn received positive critical acclaim at exhibitions both locally internationally, including the 1925 Exposition des Arts Décoratifs et Industriels in Paris, where Ericson was awarded a gold medal, the Paris Exposition des Arts et Techniques dans la Vie Moderne 1937, the New York World's Fair of 1939-40, and the Golden Gate International Exposition in San Francisco in 1939. They also participated in a number of exhibitions in Stockholm, Gothenburg, Zurich, Copenhagen and Barcelona.

Ericson and Frank's partnership lasted 33 years until Frank's death in 1967. In 1975 Ericson sold the still prospering company to the Kjell and Märta Beijers Foundation, although she retained her managerial role for a further four years. Ericson designed until her death in 1981, when she left her estate to a foundation in her name.