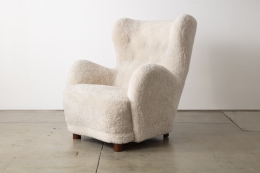 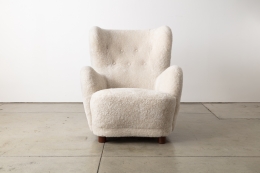 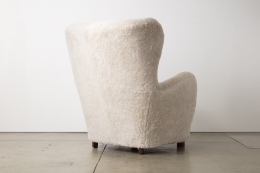 Flemming Lassen (1902-1984) was an architect and designer recognized for his numerous award winning public projects for which he produced functional and futuristic designs and furnishings executed in the modern Danish style.

Lassen was born into an artistic family; both his father and mother were painters. In keeping with his family's artistic inclinations, Lassen trained as a mason before completing his education at the Technical School in Copenhagen. In 1910, Lassen encountered the now famed architect Arne Jacobsen in his classes. Lassen expressed such enthusiasm for his studies in architecture that in fact, he persuaded Jacobsen into the field.

In the 1930s, Lassen and Jacobsen established their own firm. Their most highly regarded project, the House of the Future built in 1929, was an innovative spiral shaped flat roofed house with futuristic amenities that included mail tubes, flat screen TVs and a helipad. The House received international critical acclaim and won the Danish Architects Association competition of that year. Lassen's further projects of note were the Søllerød Town Hall in 1942 and the Nyborg Library in 1940, for which he was awarded the Eckersberg Medal, as well as a number of Swedish public libraries.