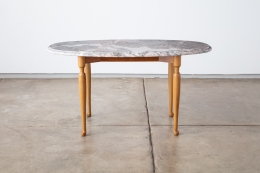 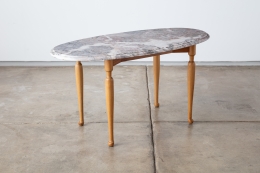 Josef Frank (Viennese, 1885 - 1967) was the leading innovator of Modern Swedish design in the 20th century.  Frank was born in Vienna and it was there that he pursued an education in architecture at the University of Technology. In 1933 Frank emigrated to Sweden. Shortly thereafter, he began working at the prestigious Stockholm design firm, Svenskt Tenn (Swedish Pewter), where he produced much of the oeuvre for which he is so admired.  There are over 2,000 furniture sketches and 160 textile designs that Frank produced for Svenskt Tenn alone.

Contrary to the precepts of Le Corbusier's modernism, Frank developed his pieces with a warmth, beauty and practicality that aligned more with the traditional ideals and comforts of the Swedish home. Many of Frank's designs incorporated organic and open frameworks, and he favored cheerful and vivid patterned textiles and hues, all of which emulated the freedom of the natural world indoors. Frank's works were popularized in the great World Expositions in Paris in 1937 and in New York in 1939.  His works were prized and collected by Prince Eugen of Sweden and are presently featured throughout many prominent public art collections as an integral part of their design programs.