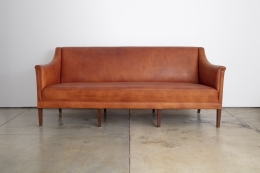 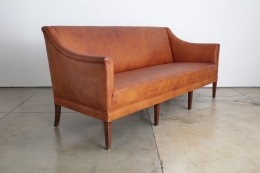 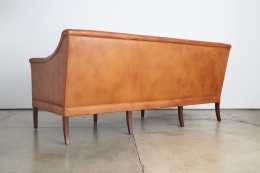 Kaare Klint (1888-1954) was a Danish furniture designer and architect- a celebrated influencer in the birth of modern Danish design. Born in Frederiksberg, he designed his first pieces of furniture in 1914, for the Faaborg Museum, including a chair that marked the first of Denmark's classic design. From the start, his work hovered between form and material, earlier styles and cultures, while also exemplifying adroit craftsmanship.

Klint opened his own firm in 1920, and continued designing pieces for many notable museums, including the Danish Museum of Decorative Art and the Thorvaldsens Museum in Copenhagen. Klint combined his research-driven acumen and love of fine wood to produce high quality revolutionary forms.
Klint was a founder of the Royal Academy of Fine Arts Furniture School in Copenhagen, where he taught from 1924 - 1954.   A primary force in the school, he helped shape many prominent designers, most notably Poul Kjaerholm and Børge Mogensen. During a time when Bauhaus and Modernism was actively rejecting classicism, Klint embraced past traditions; he believed the basis for creating significant and honest new design was by truly understanding previous molds, classical and pure lines coupled with logical form and functionalism.

In 1949, Klint was awarded the title of Honorary Royal Designer for Industry in London, followed by the C.F. Hansen Medal from the Royal Danish Academy of Fine Arts in 1954. His work is included in the collections of the Victoria and Albert Museum, London; Designmuseum Danmark, Denmark; the Faaborg Museum, Copenhagen; the Israel Museum, Jerusalem; and the Cooper-Hewitt National Design Museum, New York, among many others.