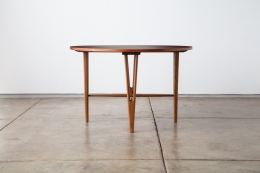 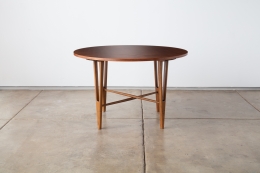 Kurt Østervig was a Danish furniture designer who initially trained as a shipbuilder before designing and crafting furniture for E. Knudsen’s Studio. Østervig’s particular style featured creative uses of wood and leather rather than steel, which was popular at the time. E. Knudsen encouraged Østervig’s predilection for wood, and he created furniture from oak, teak, rosewood, and walnut, contributing to the warm feel of his work. Opening his own studio in 1947, Østervig often freelanced his designs to other companies, including Pedersen & Son, Bramin, and Rolschau, among others. He created furnishings for a wi de variety of settings, including hotels, ships, hospitals, theatres, as well as private residences. Østervig’s pieces featured clean lines and angular forms to emphasize the texture of the wood, embracing the natural characteristics and beauty of the material.

Focusing on efficiency and versatility as well as aesthetics, Østervig used shapes, like triangles and circles, to challenge conventions of structure and shape. He also more subtly used gentle contours in some pieces to soften the designs, with an overarching reverence for the wood, typical of the time. Streamlined and sculptured, his works showcase his extraordinary skills as a craftsman.