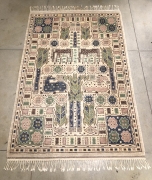 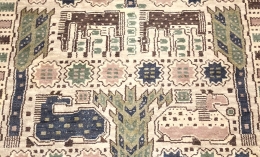 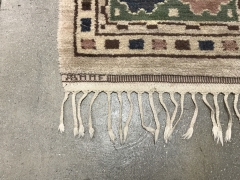 Märta Måås-Fjetterström (1873-1941) was the leading textile designer in Sweden in the early 20th century, recognized for her unique weaving techniques, which were a balance of traditional and innovative design. Måås-Fjetterström has an incredibly prolific body of work, in her lifetime she produced 662 hand-woven works and many more of her designs were produced posthumously. Her most famed creations are the rugs that she designed and manufactured for the Nobel Prize ceremonies in Stockholm.

Måås-Fjetterström was born in Kimstad in 1873. She embarked upon her artistic career first as a painter, and came to weaving in her late teens. Måås-Fjetterström became the manager of local handicrafts association in Malmö, and from 1905-1911 taught at the Kulturen weaving school run by the Swedish Handicrafts Association in Vittsjö. The mission of many schools like the one in which Måås-Fjetterström taught, was to preserve the traditional tenets of Scandinavian design in the face of progressive art movements like Art Deco and Art Nouveau, and also to counteract trends towards industrial production. While Måås-Fjetterström respected and adopted many traditional methods and motifs, she sought not only to incorporate but to improve upon and individualize these designs. The workshop had proven restrictive with respect to Måås-Fjetterström's creativity and she was fired in 1911.

In 1919, Måås-Fjetterström established her own textiles workshop, first in Vjittsjö, and then in Baståd, Sweden. There she revived seemingly lost techniques associated with early weaving, and she also developed her own new and innovative techniques, sometimes combining several different applications on a single rug. Her entire oeuvre consisted of hand-woven works characterized by bold line-work and exuberant color schemes taken from the Swedish textile tradition of home woven carpets and wall hangings that were produced with native wool, flax and cattle hair.

Originally, Måås-Fjetterström worked in a romantic and nationalistic tradition, appropriating motifs from old peasant textiles and taking inspiration from the local flora and fauna. To this, she also added elements of Art Nouveau design. Later she incorporated her knowledge of oriental rugs, building upon her previous designs to develop a unique style of her own. Måås Fjetterström eventually departed from graphic representation to focus on the aesthetics of the fibers she utilized and their respective textures, creating surface interest from purely textural effects as opposed to pattern.

Måås-Fjetterström participated in the 1925 International Exhibition in Paris where her ornamental weaves garnered considerable praise, and she also exhibited at the Musée des Arts Décoratifs in Paris in 1927. However, it was not until 1934 at an exhibition at Liljevalchs Konsthall in Stockholm, that Måås-Fjetterström's weavings received serious critical acclaim. Her works were thereafter exhibited at the British Museum in 1936, and at the Metropolitan Museum of Art in 1939.

Works made by Måås-Fjetterström's hand bear the mark MMF, and those produced posthumously are marked AB MMF. She left 700 unrealized designs after her death with full instructions as to how to produce them. After Märta Måås-Fjetterström's passing in 1941, in order to ensure the continuation of the fine tradition of craftsmanship of the Märta Måås-Fjetterström workshop, the Nationalmuseum, Carl Malmsten, Eric Wernerholm and King Gustav VI Adolf took efforts to convert it into a limited company and appointed Barbro Nilsson its director, which she served as from 1942-1970.

Posthumous works were executed by weavers who had been associated with the workshop under Måås-Fjetterström for some time. Nilsson, Ann-Mari Forsberg, Marianne Richter and Barbro Spinchorn were some of the weavers that maintained the superior craftsmanship and design of MMF works while adding to them their individual styles, and their creations have since been added to the studio catalog.

Måås-Fjetterström's textiles are part of the collections of several royal residences across Sweden, Norway, Denmark, The United Kingdom, Belgium and The Netherlands. They are also featured in prestigious institutions such as the Metropolitan Museum of Art, The Victoria & Albert Museum and The Louvre, in addition to many private, corporate and state collections.