Matias Liimatainen is an artist working primarily in ceramic and glass to create sculptures inspired by flora and fauna, which he embellishes with glazes, metallic elements, driftwood, and stone. His earlier series, inspired by robots, incorporated kinetic elements as well as lights or electronic devices, though evidence of industrial forms is visible in all of Liimatainen’s works. He is interested in the historical nature of his chosen media, offering a nod to traditional porcelain motifs by often featuring stylized, decorative flowers. Liimatainen posits that his sculptures are self-portraits, as they are reflections of his experiences. However, he recognizes the limitations of representation, always leaving his works open to the interpretation of his audiences.

Liimatainen has exhibited widely throughout Scandinavia and was recently awarded residencies in Japan and China. In 2018 his work has been featured to much acclaim at art fairs in Finland and Denmark; he will make his American debut during Miami Art Week. 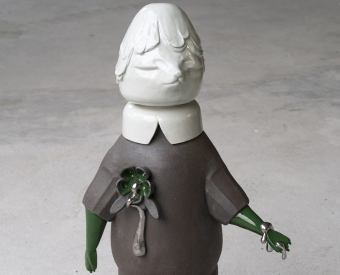 Matias Liimatainen
Back To Top