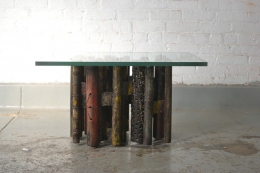 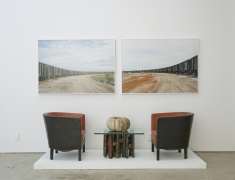 Paul Evans (1931-1987) was an American furniture designer, sculptor, and artist, most famous for his metal-sculpted furniture. Evans graduated from the Cranbrook Academy of Art near Detroit though he studied at many institutions, including Philadelphia Textile Institute, Rochester Institute of Technology, and the School for American Craftsmen. Evans eventually settled in Pennsylvania, creating a workshop near where he grew up.

In the early 1950s, Evans began creating copper chests and sculpted steel-front cabinets. He became the featured designer for Directional Furniture in 1964, insisting each piece was made and finished by hand under the supervision of the artist at each step of the process. Evans’ style shifted as time and trends changed, from rougher, Brutalist-inspired works during the 1960s to flashier, disco-inspired pieces during the 1970s, like his Cityscape series.