Richard Filipowski (Polish, 1923-2008) was a United States-based artist and member of the New Bauhaus. Born in Poland in 1923, Filipowski’s family emigrated to Canada in 1927. Inspired by his teenage discovery of a Museum of Modern Art exhibition catalog on the Bauhaus school, FIlipowski decided to pursue a formal education in the arts. Upon the completion of his studies, Filipowski sought out Lazlo Moholy-Nagy, a founding member at the New Bauhaus, appealing to him for his mentorship. So impressed by the young Filipowski’s talents and tenacity, Moholy-Nagy invited him to join his program. There he was instructed across a range of media, including painting and metalwork, all under the tenants and style of the Bauhaus. A remarkable apprentice, Filipowski was eventually asked to join the Faculty at the New Bauhaus where he taught alongside Walter Gropius and Marcel Breuer from 1946-1950. He would subsequently go on to hold positions at the Institute of Design in Chicago as well as the Harvard School of Design and MIT in Boston.

While Filipowski was a prolific artist, creating hundreds of drawings, paintings, sculptures, he was deeply private about his personal creative endeavors. Referring to them as “art of the psyche”, he believes that they were purely a process of self-expression and exploration, a personal endeavor not need not be subject to criticism of commercialization. This impulse towards privacy, coupled with his lifelong dedication to educating others, are contributing factors to his having achieved less notoriety than some of his Bauhaus peers. 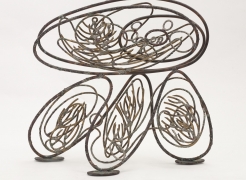