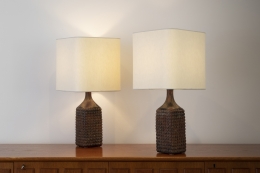 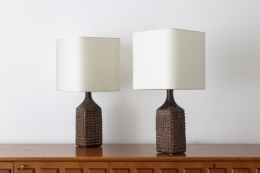 Ceramic with pattern in relief in reddish brown glaze

Stig Lindberg (Swedish, 1916 - 1982) was a Swedish craftsman active during the "Golden Age" of the Swedish industrial arts.  Throughout his career, Lindberg was engaged in a multitude of industrial and personal projects across various media including plastic, clay and paper. He is well known for his table services, which include the Berså, Spisa Ribb and Terma lines for Gustavsberg. He also designed art glass for Kosta Boda and Holmegaard and textiles for Nordiska Kompaniet.

Stig Lindberg was born in 1916 in Umeå, a seaport town in Northern Sweden. He was the pupil, protégée and eventual successor of Wilhelm Kåge, who was the design director for Gustavsberg Potteries from 1937-1940.  Lindberg continued to work for Gustavsberg through 1980 and served as its director from 1949-59 and 1972-78.

Initially working under Kåge as a faience painter, Lindberg was eventually permitted to explore different media and techniques while at Gustavsberg. It was the objective of Gustavsberg that their industrial products should exhibit an integrated functionalism and artistry; designers like Lindberg were encouraged to experiment across numerous media, form and color to achieve this balance.

Lindberg proved a highly adaptable craftsman, and his output included high quality stoneware and plastic household articles; Lindberg was also responsible for much of the graphic art used in Gustavsberg's advertising. Personal projects included the illustration of children's books and experimental stoneware. Many of Lindberg's works exhibits an undeniable merging of his individual style of craft with industrial techniques.