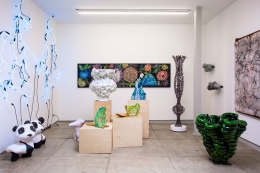 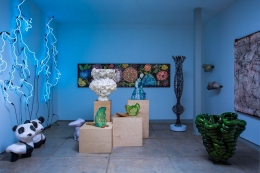 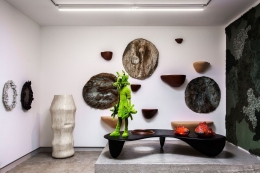 Los Angeles, CA – Hostler Burrows is pleased to announce Forest Primeval, an inaugural group exhibition that marks the official opening of its Los Angeles gallery, running February 10 through March 21, 2020. A Champagne Reception co-hosted by Sarah Harrelson, Founder of Cultured and LALA Magazine, and Jennifer Roberts, CEO of Design Miami/, will be held on Friday, February 14, from 12 to 3 pm.

Since humankind’s earliest creative endeavors, the natural world — its expansive beauty and mystery — has been a constant source of inspiration for artistic expression. From the time of the 40,000-year-old Sulewesi cave drawings, humans have traced, recorded, and paid homage to their complex relationships with nature and the deeply personal and spiritual connections it fosters — the way it holds us in a much larger existential context. Many millennia on, we continue to draw from this seemingly infinite source even as we witness the ravages of global warming. This exhibition explores our dependence on nature, less for the tangible resources which have thus far sustained our physical beings, and more for the way it feeds our creative, philosophical and intellectual spirits.

The exhibition takes its title from the opening line of Henry Wadsworth Longfellow’s epic poem Evangeline (1847), in which the poet softened his bleak account of the expulsion of the Acadians from Nova Scotia in 1755 with reverential narrative of the beauty of the natural world. This exhibition similarly asks us to pause and consider the old growth, the ancient roots and gnarled markers that tie us to place, the forests primeval from which we draw comfort and inspiration.

Hostler Burrows was founded in 1998 by Juliet Burrows and Kim Hostler, to showcase the works of artisans and architects working at the forefront of the 20th Century Nordic Modern movement, many of whom were still unknown in the global marketplace. Over the last twenty years the gallery has expanded its program and now integrates a full roster of contemporary artists, both established and emerging, with historical works. While international in scope, its primary focus remains in Scandinavia and rooted in the tradition of studio ceramics, particularly work by female artists.

Of the gallery's recent expansion, the owners note “the new Los Angeles outpost provides us with additional space to present the gallery’s existing program to a broader audience, and allows us to more closely engage with the dynamic cultural community on the West Coast — particularly the artists and designers choosing to live and work there. We see this as an opportunity to experiment with new ideas and allow artists and collaborators an additional forum in which to express themselves.” 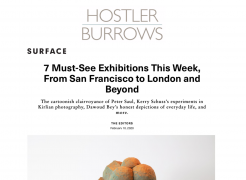 Surface
7 Must-See Exhibitions This Week, From San Francisco to London and Beyond February 10, 2020
Download PDF View More
Back To Top